Gov’t should back off personal choices

This editorial excerpt is from amarillo.com . The full title is: “On the edge of common sense: Government should back off personal choices.” Who knew they’d been protesting for raw milk rights down there in Texas too? This piece is written by Baxter Black who is apparently a veterinarian and a cowboy poet. Now a veterinarian ought to know a thing or two about milk, and milk pathogens, don’t you think; yet here he is saying people ought to have the choice. Enjoy:

“The news has been filled recently with protesters demanding to be able to purchase raw milk, the American Medical Association warning that home births are not safe, and desperate cancer victims reserving the right to buy alternative “cures” not approved by the U.S. Food and Drug Administration.

My father was born in 1918 in his mother’s bedroom, drank raw milk and was raised in a family that used a variety of homemade or traveling medicine man’s potions to cure what ails you. END_OF_DOCUMENT_TOKEN_TO_BE_REPLACED

To put [the judge’s ruling in the post below] into context, the following is a brief synopsis. 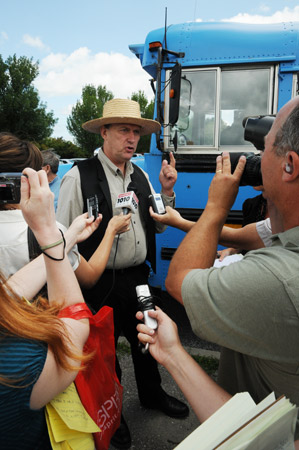 Michael Schmidt answers questions from reporters after a motion hearing in Newmarket, on July 31.

We filed the motion.

The Crown filed a reply.

Upon commencement of the motion hearing, the JP clearly stated that he had read all the material and did not need any further information or discussion, unless either party had something further to add. In other words, he had his decision prepared in advance of the hearing. We indicated that we did have further information to add, because we had a reply to the Crown’s filing.

After Michael rendered his oral reply to the Crown’s reply, we provided to the Court and the Crown, in one binding, the text of our oral submissions. This provided the court with an opportunity to see our grounds for the motion in proper context.

The court recessed for 10 minutes.

Upon returning from recess, the JP read his decision and provided us with a copy of that text [in the post below].

The lack of desire to have the matter debated in court, the lack of substantive counter evidence by the Crown, the fact that the decision was drafted even before the start of the motion hearing, and the grounds, or lack there of, in the court’s decision only acted as further confirmation of our position. We are all the more resolute in seeking a just rendering on the motion and are appealing the decision with full confidence.

The state steps in it – in Washington

So what’s it like living in a state where raw milk IS legal? It seems from the case described below that even the fact of raw milk being legal doesn’t adequetely protect raw milk users from what looks like arbitrary state interference in their dietary and business affairs. Wasn’t it Pierre Trudeau who came to the public realization back in the 60s that the state had no place in the bedrooms of the nation. So now we might well wonder what the state is doing in our refrigerators? Are they keeping us “safe”? Protecting us from ourselves? Or looking for a midnight snack?

This piece is excerpted from the blog of Kurtwood Farms, a certified grade A raw dairy in the state of Washington, down there in the US and A.

The State Steps In

“For the past two plus years this dairy has had a Grade ‘A’ dairy license. Issued by the Washington State Department of Agriculture, it gives me the right to sell milk, raw milk, to the public. The dairy is inspected, the milk tested, and product deemed fit for human consumption.

Raw milk is legal in only a limited number of states in the Union. Although the Pasteurized Milk Ordinance is a federal document (it also addresses raw milk laws) the states have the right to allow or not allow raw milk within their states. Raw milk is not eligible for interstate commerce. The state of Washington allows raw milk to be sold to the public and I am very fortunate for that law as are my customers. END_OF_DOCUMENT_TOKEN_TO_BE_REPLACED

TORONTO, September 26, 2008 – Snowy Owl Productions is pleased to announce that the film Michael Schmidt: Organic Hero or Bioterrorist will have its Canadian premiere at the 2008 Planet In Focus international environmental film and video festival in Toronto.

The screening will take place at the Royal Ontario Museum Theatre (ROM) at 7 PM on Thursday October 23rd.

MICHAEL SCHMIDT: ORGANIC HERO OR BIOTERRORIST
The story of raw organic milk in Canada and a consumer’s right to choose

This documentary film follows a year in the life of an activist farmer. It tells the story of raw, organic milk in Canada and the right of informed consumers to choose and procure the food they want to eat directly from farmers they trust.

The Milk Act of 1938 made it illegal to sell raw (unpasteurized) milk in Canada. In November 2006, twenty-five armed officers staged a raid at Michael Schmidt’s farm in Ontario, confiscating milk, equipment, computers and files. This film follows Schmidt as he struggles to continue providing his “farm fresh milk” while battling authorities, preparing for his trial, and attempting to find a political solution to legally provide raw milk in Canada. END_OF_DOCUMENT_TOKEN_TO_BE_REPLACED

Later today or tomorrow we should have a complete update on what’s happening with Michael Schmidt’s “Motion to Dismiss Charges”, which was heard in Newmarket court last Monday.

Also coming up will be news about Michael Schmidt’s new baby. Yes, apparently it’s true that a new raw milk drinker has joined the fold up at Glencolton farms. Stay tuned for the exclusive story.

And remember, you heard it through the bovine.

Here are some excerpts from Michele Gienow’s article in the Baltimore Citypaper titled “Raw Deal: Notes from the Amish Dairy Underground“. Accompanying pictures are also from the same source. This piece comes highly recommended by Suzanne Nelson, author of the stories in yesterday’s posts about efforts to re-legalize cowshares arrangements in North Carolina. 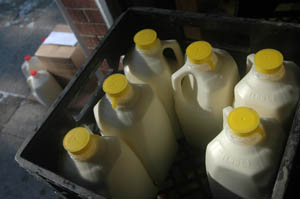 SPECIAL DELIVERY: Gallons and half-gallons of Amish raw milk awaits pickup on a below-freezing day at a Baltimore co-op drop-off point (usually the milk is kept in a refrigerator).

“… I’m feeling a little antsy. It’s been two weeks since I last hooked up with my supplier, and my stash is completely gone. There’s no other way to score the stuff. My 4-year-old son is also stressing, since his addiction is even more pronounced than my own. This morning I tried to pass him off some inferior, uh, product, but he was onto me in a flash. “Mama,” he said sternly, taking a whiff and then passing it back to me. “This milk is yucky. Where is the real milk?”

Actually, he means raw milk. As in, straight from the cow to the jug to you, do not pass go, do not pasteurize or homogenize. And most of all do not drink in Maryland, where raw milk sales for human consumption are strictly prohibited…” END_OF_DOCUMENT_TOKEN_TO_BE_REPLACED

Resurgence of Interest in Raw Milk

Stats for the Bovine blog. The unit of measure is hits per day.

This is a snapshot of blog stats from early Friday morning. It shows a peak of 330+ hits per day during Michael Schmidt’s contempt of court trial on the 10, 11 and 12 of September. Readership then appears to tail off gradually down to a low of 55 last Saturday Sept. 20, then begins to climb to another peak of 178 hits on the 24th.  The 25th is nearly as high at 172. The total shown here for Friday the 26th is from 9 or 10 am.

It’s encouraging that so many people are reading this. Tell your friends. Link to us from your own blog or webpage. Comment on the posts here. And thank you all for your interest in raw milk!

Raw Milk back on the table in N.C.

To follow up on the story below from North Carolina about legislative moves to re-legalize cow share arrangements in that state, here are some excerpts from another more recent story, from May 21, 2008, again by Suzanne Nelson from Indyweek.com, reporting on progress and giving some good background as to why growing numbers of people care passionately about access to raw milk: 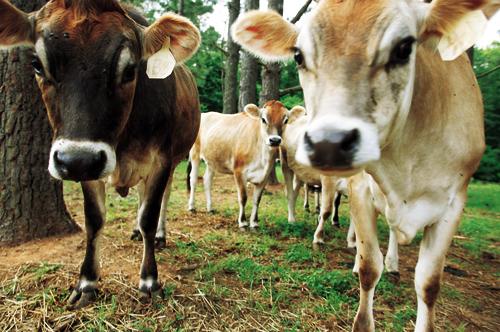 “… Interest in consuming unpasteurized milk has increased nationwide in recent years, as reports of its health benefits and desire for the taste of the dairy of people’s childhoods have multiplied. Last year, a study of nearly 15,000 European children published in Clinical & Experimental Allergy found a statistically significant relationship between consumption of raw milk and lower rates of asthma and allergies.

State Rep. Pricey Harrison (D-Guilford) plans to shepherd the bill, the Small Dairy Sustainability Act, through the House. It passed the Senate last year by a vote of 39-9, and now it must be approved by both the House committees on agriculture and health before consideration before the whole chamber.

Harrison says she agreed to sponsor the bill because she feels “pretty strongly about this organic and sustainable farming community.”

“There is lots more we could be doing to make small family farms viable by letting them sell directly to consumers,” Harrison says. “The other piece is that I get a little frustrated with heavy-handed government sometimes. I think this is an instance where people should be able to make the decision.” END_OF_DOCUMENT_TOKEN_TO_BE_REPLACED

The following excerpts are from an article by Suzanne Nelson, titled: “Drink it raw: Why is unprocessed milk the only illegal food in North Carolina?” which appears on indyweek.com . The article is followed by 69 comments, many of them highly impassioned. The debate is further followed up on another website under the title The Assault on Science. 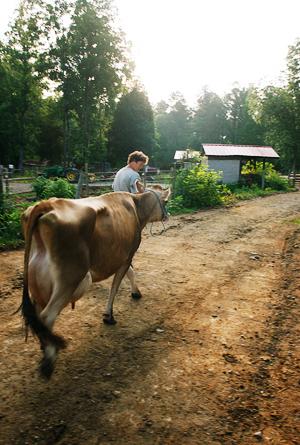 “…Until three years ago, North Carolina allowed contractual agreements through which consumers could purchase a share in a cow or goat, pay the farmer the agricultural equivalent of room and board—much in the way people pay stables to care for their horses—and then have a legal right to the animal’s milk, or a fraction thereof. Cow shares were banned in 2004 with a line slipped into unrelated legislation without a hearing.

It is that legal arrangement that raw milk advocates in the state are trying to reinstate. Sen. Kay Hagan (D-Guilford) introduced a bill this session that would repeal the ban.

“I have been amazed at the number of people I have met who want to drink milk that comes from a cow that has been raised not in confinement, grazed on grass, no hormones or antibiotics,” Hagan says, adding, “back to what God and nature intended.”…” END_OF_DOCUMENT_TOKEN_TO_BE_REPLACED