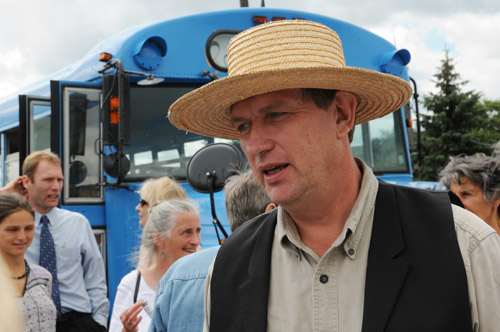 Raw milk farmer Michael Schmidt with supporters at the blue bus outside the Newmarket courthouse following the contempt of court motion hearing July 31, 2008

The story of recent events in a nutshell (excerpted from a letter in the October edition of Vitality magazine):

END_OF_DOCUMENT_TOKEN_TO_BE_REPLACED

Mark MacAfee responds to the veto

According to the Sacramento Bee blog, the California Governor’s veto of a raw milk bill is par for the course. They say that, as of last Wednesday, Governor Schwarzenegger had signed into law 772 bills and vetoed 415 and that that 35% rejection rate is the highest in 40 years.  Read their report with details on many of the bills that have been recently vetoed by the California Governor.

In other news, the Haphazard Gourmet Girls seem happy the bill was vetoed. Theirs is one of the few anti-raw-milk posts that’s actually funny. Have a look for yourself.

And now, from the Complete Patient blog via Cheeseslave, we bring you some comments on the recent veto by Mark MacAfee of Organic Pastures, probably the largest raw dairy in California:

Mark MacAfee with supporters at the April 2008 Senate hearings.

Mark McAfee, farmer and owner of Organic Pastures Dairy (pictured above with his supporters at the Senate hearings in June 2008), posted the following two comments on The Complete Patient blog today [that would have been Oct. 2, 2008]:

END_OF_DOCUMENT_TOKEN_TO_BE_REPLACED

This article excerpted below is titled “The Criminalization of Raw Milk” and is by Linn Cohen-Cole, from the Audarya Fellowship Website. It gives more detail on the case of Pennsylvania Mennonite farmer Mark Nolt who was featured here in a story October 1, titled “Big brother cows farmers over raw milk”. 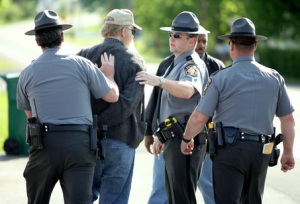 “…. On April 25, 2008, in Cumberland County, Pennsylvania, Mark Nolt, a Wenger Mennonite (Horse and Buggy Mennonite) dairyman, threatened for months with arrest for selling raw milk without a permit was removed from his property by state troopers. END_OF_DOCUMENT_TOKEN_TO_BE_REPLACED