Not only does he drink, he also smokes

The latest from that Michael Schmidt:

One of our readers send this in to the Bovine’s galactic headquarters. Firstly, here’s a photo of the poster that Lois was referring to in her original letter (farther down in this post): 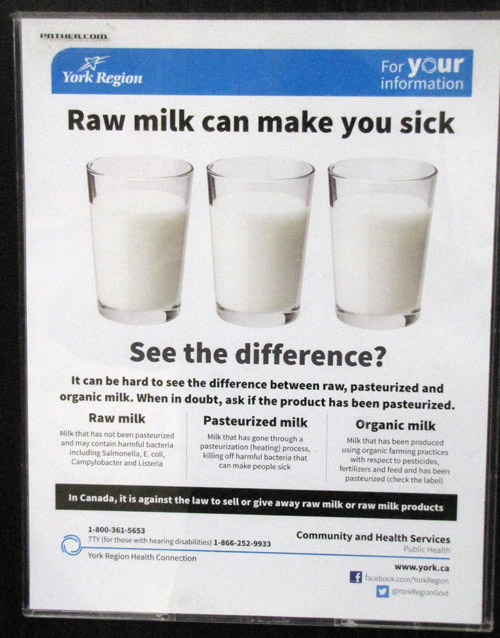 Raw milk awareness poster from York Region (Ontario, Canada). Thanks to an alert reader of the Bovine for sending us this photo.

I was reading The Liberal (Richmond Hill local paper) and came across this letter-to-the-editor:

LETTER TO THE EDITOR: Agree with letter writer on raw milk

Although I don’t drink raw milk, I agree with Lois Banks’ letter. Over the last few months, I have been following the regional and provincial governments’ persecution of a local farmer and his family. It is beyond disturbing that for years, these ethical, knowledgeable individuals have been intimidated, harassed, and dragged through the courts. And why? — for the sole purpose of preventing them from legally providing clean and healthy raw dairy products to people in a closed co-op group. The harassment continues.

If the government believes these products to be unsafe, they should regulate them through legitimate third party testing. It’s hypocritical of governments to engage in these bullying practices when large corporations are free to sell known carcinogens, such as those found in tobacco products. It’s very apparent that tax revenues take priority over citizens’ health. This is yet another illustration of our government engaging in David vs. Goliath tactics.

It is also completely unacceptable that our increasingly stretched tax dollars should be used in such a wasteful manner.

Surely in a democracy, unwarranted government interference in the food and drink choices of its citizens is an infringement of basic human rights.

York Region’s raw milk poster is offensive and misleading. There are more kinds of milk than this.

Raw milk, like any ‘raw’ or ‘pasteurized’ food, can make you sick if contaminated.

People who drink unpasteurized milk do so mostly because they wish to have whole organic or biodynamic foods, support sustainable farming and consume food from local farmers.

Thousands are drinking milk from goats, sheep, buffalo and cows. Canadians are free under the Charter of Rights and Freedoms to eat and drink what they wish, follow their own conscience, and pursue happiness and health.

Canada is the only G8 country where unpasteurized milk is not regulated and sold in stores. Why not regulate milk here too?

The Queen of England drinks raw milk and so do all of her children and grandchildren.

If you want to understand the bigger picture and find out where our current milk laws originated, see the documentary Farmageddon.

Thousands are dying from cigarette-related diseases and other things. Let’s put the focus where it really is needed.