“The fear is so deep-rooted that it goes beyond milk powder—food rumors about things such as plastic seaweed and seedless grapes cultivated with birth control medicines frequently send consumers into a tailspin.

There are at least three reasons for the failure to restore people’s confidence in domestic food, notes Huang Yanzhong, a senior fellow for global health at the Council for Foreign Relations in New York.

“It’s very hard to have a strong sense of optimism.”

One is the excessive use of pesticides and fertilizers in the 1980s (pdf, p.3), which has contaminated farmland, and could be transferred to cows that eat that grass. The government has only just started to tackle the problem, Huang said in an interview with Quartz. China also has a top-down regulatory method, which makes it hard for the public to engage with the process, particularly given the lack of press freedom, he says. There is also a general perception of a “moral decline” in China, where people try to make money by whatever means it takes, Huang adds, noting that sometimes even farmers themselves don’t eat what they grow (link in Chinese) for the market….”

Get the full story on Quartz (qz.com).

Are we all Chinese now that China holds America's trillion dollar debt? Photo of dairy aisle in Chinese supermarket from China News.

Here are some telling excerpts from a recent post on the Haphazard Gourment blog. The Mr. Marler quoted below is a lawyer who specializes in food poisoning litigation.

“….So what is the massive disconnect with FDA’s position on China? Mr. Marler’s response is haunting:

“Why did the FDA not recall any Chinese product suspected with melamine? One reason, China owns one trillion dollars of our debt. China is our banker and you do not mess with your banker. Think about how quickly the FDA threw the spinach and tomato industries under the bus when contamination was suspected.”….”

Tagged as melamine, public health, US

This story comes to us from the "Chinaworker" news site

Even eggs are contaminated with melamine in China. Photo from Mercola.

Here’s an Asian perspective on the contaminated milk crisis — in which it seems much more than milk is contaminated, and the contaminants are not limited to melamine. Here’s an excerpt from the Chinaworker site, from a story dated November 3rd, 2008:

“Fish, pork, and chicken contaminated with the industrial chemical melamine along with milk and eggs

China’s food contamination crisis deepens by the day. More rigorous food testing in the wake of September’s toxic milk scandal has unearthed widespread use of melamine – a chemical used to make plastics and glue – in a range of animal products including eggs and fish. Melamine is banned from food production as it causes kidney and liver disorders. This was tragically shown when four infants died and more than 13,000 were hospitalised after being weaned on tainted infant formula. Melamine had been deliberately added to thinned-out milk to raise its protein content – and profits. Chinese people are used to food scares. But the plight of small children, given the government’s one child policy, meant this scandal would inevitably have massive repercussions. Sales of milk and milk products have plunged since mid-September. The government has faced a storm of pressure effectively ending its Olympic ‘honeymoon period’. END_OF_DOCUMENT_TOKEN_TO_BE_REPLACED

Nido and Lactogen, two Nestle products affected by the recall in South Africa

Unlike in the United States where public health officials are pretending it’s “business as usual” (see post below), South African health officials have ordered Nestle to withdraw products from store shelves.

Here are excerpts from two news stories covering this latest development in the melamine saga. The first, from The Times, titled “Nestle Baby Formula Recall”, is by Nivashni Nair:

BATCHES of Nestlé baby formula have been pulled off shelves in South Africa after tests showed they contained unacceptably high levels of melamine.

Blog: Contaminated baby formula: From the mouths of cows

The department of health said yesterday that mothers should stop using the products Nido and Lactogen and return them to the shops at which they were bought. END_OF_DOCUMENT_TOKEN_TO_BE_REPLACED

Thanks no doubt to the far-reaching results of globalization, companies that supply 90% of the American baby formula market are finding melamine in their products. Here’s an excerpt from the Associated Press story (via The Huffington Post):

“Traces of the industrial chemical melamine have been detected in samples of top-selling U.S. infant formula, but federal regulators insist the products are safe. The Food and Drug Administration said last month it was unable to identify any melamine exposure level as safe for infants, but a top official said it would be a “dangerous overreaction” for parents to stop feeding infant formula to babies who depend on it.

“The levels that we are detecting are extremely low,” said Dr. Stephen Sundlof, director of the FDA’s Center for Food Safety and Applied Nutrition. “They should not be changing the diet. If they’ve been feeding a particular product, they should continue to feed that product. That’s in the best interest of the baby.” END_OF_DOCUMENT_TOKEN_TO_BE_REPLACED

Tagged as baby formula, melamine, US

In today’s post we feature a picture parade that tells the story of melamine contamination in milk products, what it is, what it’s for, how it works and some hints on how to recognize and avoid contaminated foods.

Adulteration of milk has historically not been limited to China. In North America, in the early decades of the last century, substances such as chalk were added to milk from large dairy farms that tried to cut their costs by feeding their cows distillery swill (leftovers from the distillation process) instead of hay and pasture. With it’s fairly recent shift to industrialization, China may well be going through a similar sort of birthing pains as were once felt here in Canada and the United States. But while we used chalk, they’re using melamine. But the purpose was the same — to make the milk seem more nutritious than it really is.

Ultimately, the lesson of the melamine scandal is: Know where your food is coming from. Cultivate personal relationships with local growers, because the corporate food chain just can’t be counted on to look out for the health of consumers. Beyond melamine there’s the whole issue of GMOs just lurking under the level of public awareness. How long will it take before GMO contamination becomes the next “melamine scare”?

Thanks to farmer Michael Schmidt for passing the following information and pictures along to the Bovine, which he received in the form of an email. We’ve edited some of it for style and content. END_OF_DOCUMENT_TOKEN_TO_BE_REPLACED

U.S. Health and Human Services Secretary Mike Leavitt speaks at the opening for the new U.S. Food and Drug Administration office in Beijing , China, Wednesday, Nov. 19, 2008. The U.S. Food and Drug Administration opened a new office Wednesday in China's capital, its first outside the United States, as part of a new global strategy to ensure the safety of trillions of dollars of imports.(AP Photo/ Elizabeth Dalziel) -- Caption & photo from Associated Press.

In case anyone is in any doubt about intentions to offshore North-America’s food and dairy production, here’s a chilling story from Associated Press about the U.S. Food and Drug Administration setting up a branch in Bejing.

And of course they’re cleaning up China’s dairy operations to meet world standards, or so they say.

Here’s an excerpt from the recent Associated Press story by Tina Tran:

“…Milk and milk products tainted with melamine, an industrial chemical, have been blamed in the deaths of at least three infants and have sickened more than 50,000 others. The government has detained dozens of people in the scandal, but there have been no court cases so far. END_OF_DOCUMENT_TOKEN_TO_BE_REPLACED

“My little China girl” — still in hospital with melamine poisoning, one of 1,272 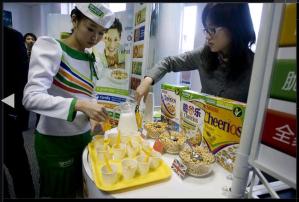 Breakfast in Shanghai -- Chinese milk and American cereal? 1,272 infants are still in Chinese hospital for melamine poisoning. Do you know where your milk comes from? Wall Street Journal photo

Fun as it was, the story (below) about Apocalyse Chow is admittedly more than a month old. Here’s a more recent update (Thursday Nov. 13) on the China melamine milk scene. This is from NewsInferno.com and is titled “Nearly 1300 infants still hospitalized from melamine tainted milk”. This report summarizes some of what we’ve heard before from other sources. I see from the “search terms” listings that people are still looking for information on Chinese melamine milk contamination.  So here’s the latest, or at least an excerpt from the latest: END_OF_DOCUMENT_TOKEN_TO_BE_REPLACED

Chinese milk solids are a hidden ingredient in everything from edible sex toys to white rabbit candy. Photos via Haphazard Gourmet Girls blog.

Further to our last post on this topic, it seems the Haphazard Gourmet girls are out walking the streets of L.A., doing their bit to track down and bring to justice renegade food products of Chinese origin that are lying in wait for unsuspecting Americans. And they’ve found some doozies: END_OF_DOCUMENT_TOKEN_TO_BE_REPLACED

This is the most detailed story we’ve yet seen on the tainted milk situation in the People’s Republic of China. Written by Gordon Fairclough of the Wall Street Journal, it’s well worth reading the original lengthy article and seeing all the great pictures. We’ve included a couple of them in our excerpt here. One wonders how much of this sort of thing goes unreported in other countries:

“ZHANGZHUANG, China — Before melamine-laced milk killed and sickened Chinese babies and led to recalls around the world, the routine spiking of milk with illicit substances was an open secret in China’s dairy regions, according to the accounts of farmers and others with knowledge of the industry. END_OF_DOCUMENT_TOKEN_TO_BE_REPLACED