Reflections on a sheepish affair 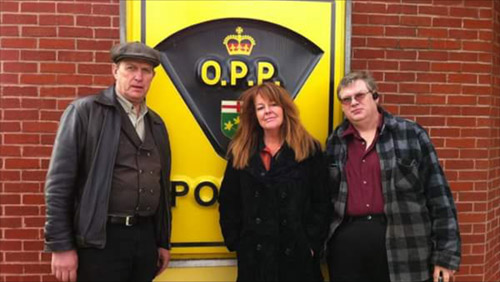 Michael Schmidt, Montana Jones, and Robert Pinnell — three of the four people accused in the 2012 sheep-napping case. Photo taken at start of proceedings.

It has been 1403 days since my adventure with the legal system started. Today in the Superior court in Newmarket all charges in regards to me were withdrawn.

In the beginning there were 4 of us charged with the disappearance of 31 Shropshire sheep. Myself, Robert Pinnell. Michael Schmidt. Susan Atkinson. And Montana Jones. Now after 1403 days Michael and Montana are the only ones left standing.

What make this even more interesting is, that I had actually given a video statement, where I confessed, that I was the one that drove the truck and transported the sheep from one place to another. No one else had given a statement although Susan had later given a statement and plead guilty to a lesser charge. I never once said I was innocent  just that I was not guilty of what I was charged with — CONSPIRACY.

Many times the topic of jail time was brought up and the statement I gave every time was 3 hot’s and a cot and someone else does my laundry jail doesn’t sound to bad to me. You see, I have always lived my life with the understanding snitches get stitches and that you never turn on a friend. I think the powers that be were unable to understand the fact I would rather spend years in jail then help them build a case on another person. I think anyone that knows me will tell you that is how I have always been.

They offered me 2 years of jail instead of 5 IF I would snitch on my friends.

So here I am. Now that all charges have been withdrawn against me I am free to say a few things. Up to this point I have kept silent, not wanting anything I might say to be used to help the crown. I will still keep some things to myself, but as the years have passed many of the small details have faded so I don’t think I would be of much help to the regardless.

I am sure that anyone that has been following the case in the media will remember that on April 1 2012, 31 sheep went missing and that they were found sometime later on a farm outside of Owen Sound. The C.F.I.A. had been searching for these missing sheep with all their available resources. In my humble opinion it was a man… I mean sheep hunt worthy of a great serial killer. At long last they were located with the help of a tip from the public. That is where this story starts to become beyond belief.

After a great and lengthy investigation, I was finally contacted by the lead inspector. I had left my name and phone number with the farmer where the sheep were staying with instructions to give it to the authorities if the sheep were located so that he would be able to point them to the real bad guy. Me.

They did come and talk to me a few days later and I gave them a video statement telling them what I did. I have never once said to them I did not move the sheep but I did not share with them anyone else’s name.

After this they proceeded to investigate and a few weeks later they raided the place I was living as well as the homes of the other accused. And all of this leads us to where we are today.

Over the 1,403 days, I had 51-52 days in court, frankly I lost count. I received in excess of 12,000 pages of disclosure material. I did find the disclosure interesting, as it shows exactly how messed up the C.F.I.A. actually is. I am not actually sure if I can be charged again if I talk about specific details of the disclosure so I will just say that with the CFIA watching the quality of the food you eat, you are probably better off to put a gun in your mouth then to eat anything they approve. The way the organization is run, would be like a comedy if not for the fact that peoples lives are in the balance.

No place but a government agency could things be this messed up. Not only does the right hand not know what the left is doing I don’t even think there is a left hand.

Also for those people that don’t know me I had stopped shaving and cutting my hair the day I was charged so I have 1,403 days worth of hair. The reason I did this was to give a visual as to how long it actually takes to go through the legal process in Ontario. I must say that I never thought it would take this long and I will be very happy to finally shave. I know that both Michael and Montana still have more court time to look forward to so if anyone reading this is interested in donating to help them to finish this.

I am willing to let anyone that donates have their name put in a hat for, who gets to do the shaving. I am just trying to do my part to help them keep going.

Regardless of who does the shaving we are going to film it and make it available on YouTube.

There is a lot more to the story but some things I will have to refrain from saying until everyone is finished in court.

1,403 days worth of beard and hair growth on Robert Pinnell